Scale and gauge are actually two very different concepts. Scale refers to the proportional relationship between a given model and the prototype it is supposed to represent. Gauge, on the other hand, refers to the distance between the two rails upon which our model trains operate.

One Gauge – Many Scales – Much Confusion

Ideally, model trains built to a particular scale should also run on a model track gauge proportional to that of the prototype. Historically, as garden railroading has evolved, this has not been the case. Concern for scale has generally taken a back seat to the expediency of one almost universal track gauge – 45mm – and the result has been a cacophony of scales, mismatched models, and confusion, all trundling down the same track under the vague heading of “G-scale”. On many garden railroads, one can find models of American standard gauge trains (4′-8 1/2″) operating right along side (3′) narrow gauge, European meter gauge, and even Maine 2′ gauge trains – all on the same track. As many as six different scales (1:32, 1:29, 1:24, 1:22.5, 1:20.32, and 1:13.7) now populate the large scale scene!

Unlike the smaller model railroading scales, where each major scale has it’s standard gauge as well as narrow gauge counterparts ( for example: O, On3, On30; or H0, and H0n3), each scale making use of several different, proportional track gauges, large scale has not had this option – until now. 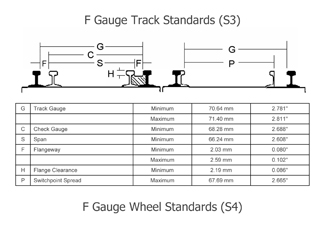 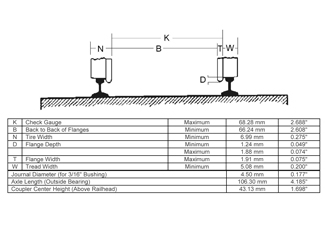 Probably the majority of large-scale railroading is devoted to modeling such classic 3′ narrow gauge lines as the Denver and Rio Grande Western, Rio Grande Southern, ET&WNC (Tweetsie), and others. These lines have each been modeled in several scales for operation on #1 Gauge track; however, the 1:20.32 scale (what the NMRA has now finally recognized as “F-scale”), most accurately represents 3′ narrow gauge prototypes operating on 45mm gauge track. Over the past few years, most of the smaller manufacturers, brass importers, and Bachmann have committed themselves to this scale and hence to accurate 3′ narrow gauge modeling.

Of course, accurate narrow gauge models are best complemented by accurate standard gauge ones. F-scale solves the garden railway scale and gauge dilemma by creating a new track gauge of 70.64mm (2.781″) Now both narrow and standard gauge trains can be accurately modeled together in the same scale.